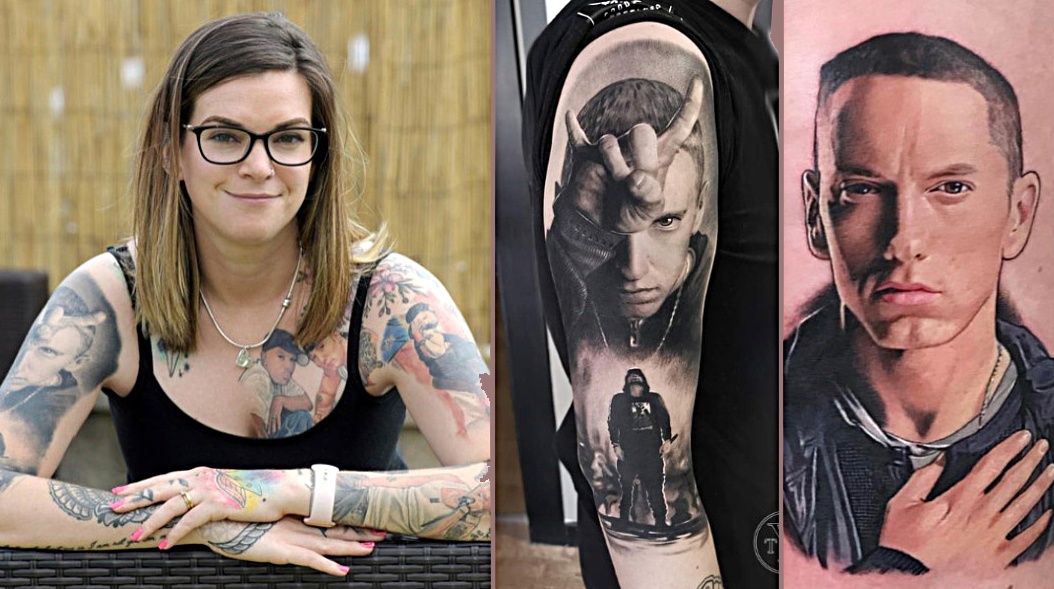 Nikki Paterson from Aberdeen, Scotland, United Kingdom, is beginning to feel like a ‘Tat God, Tat God.’ She has now achieved the Guinness World Record title for the most tattoos of the same musician tattooed on the body by getting fifteen portraits of Eminem, inked on her body.

“My tattoos have completely changed my life. I am so proud of them. I put my first tattoo of Eminem at the age of 19 by picking an image of him from Google.” says Nikki.

Tattoos include the ‘blonde’ Eminem as well as the album covers from The Marshall Mathers LP to Recovery. She also has the full list of Eminem’s 11 albums, from Infinite to the most recent Music To Be Murdered By. Her back of thigh also include lyrics of the verse from the song “Till I Collapse.”

Her body tattoos also include pictures of Skylar Grey, who has featured on various tracks with Eminem. Nikki also has Big Proof and Eminem tattoo on her: “This one here is very important one because it’s Eminem and Proof and Proof is Eminem’s best friend. He got killed so that was really significant time in Eminem’s life so I wanted to have a tribute to him.”

“The way Eminem told a story with the lyrics on ‘Stan,’ it was such an unusual story compared to anything I had heard before. The idea of potentially having a record came to me and I thought it would be a lovely celebration of them.” says Nicki and now she has joined her idol in the Guinness World Records archives, with Eminem himself holding multiple record titles. You can check the list of al Guinness World Records set by Eminem here.

“I really want to meet Eminem and I think this might help!” says the Guinness World record holder. Watch the video below: