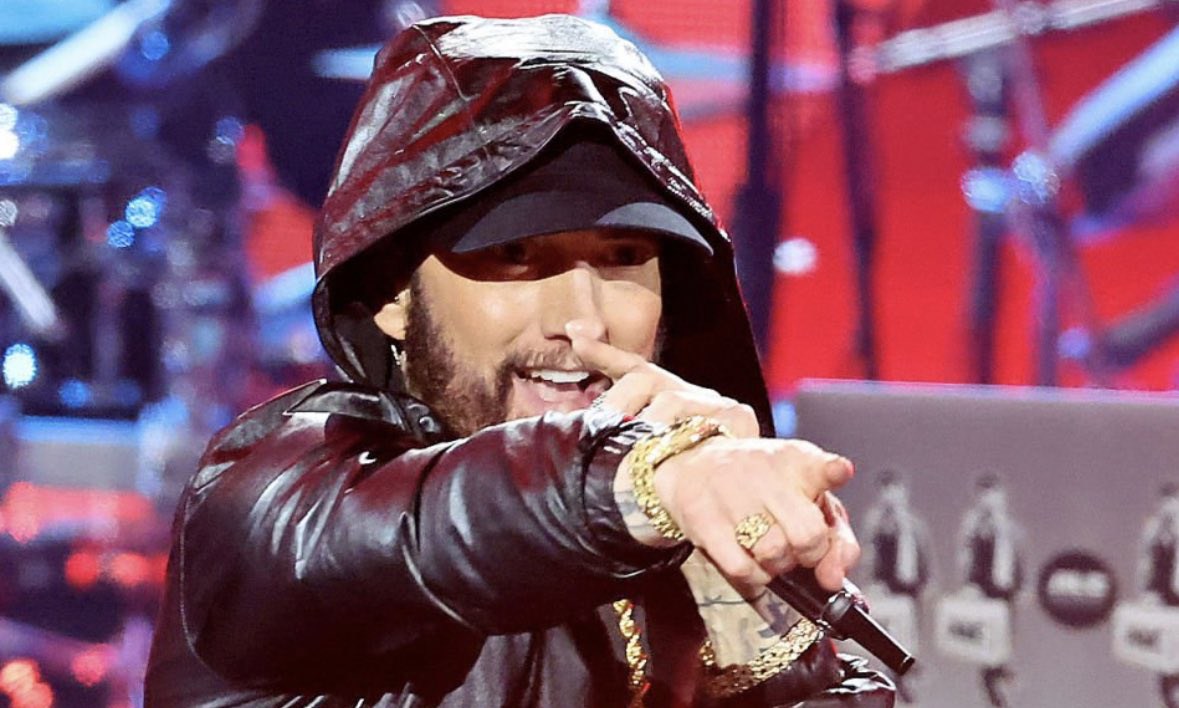 Last night Eminem was inducted into the Rock & Roll Hall Of Fame by Dr. Dre. Here is his full acceptance speech and performance, featuring Steven Tyler and Ed Sheeran.

“Can y’all hear me? I can’t hear me. Can you hear me?” started Em after the incredible performance of some of his greatest hits.

“This s**t is crazy. So I wrote some s**t down tonight that I’m never going to f**ing remember, so I had to read it off the paper and s**t, but it is from the heart. I realize what an honor it is right now for me to be up here tonight, and what a privilege it is to do the music that I love, and the music that basically saved my life.”

Then he continues: “Where’d the man, where did Dre go? The man who saved my life, ladies and gentlemen, Dr. motherf—in’ Dre. So I’m going to try to make this as quick and painless as possible. I’m f—ing stuttering and s–t, I mean Jesus Christ.

“Secondly, I almost died from an overdose in 2007, which kind of sucked. Hailie, plug your ears: because drugs were f—ing delicious, and I thought we had a good thing going man, but I had to go and f— it all up and take too many. God d–n. OK Hailie.

“OK, so. Hold on, I lost my motherf—in’ spot. Paul, did I say, I said drugs were delicious, right? And finally, I had to really fight my way through man to try and break through in this music, and I’m so honored and I’m so grateful that I’m even able to be up here doing hip-hip music, man, because I love it so much.

“My musical influences are many, and they say it takes a village to raise a child. Well it took a whole genre and culture to raise me.”

“They say success has many fathers, and that’s definitely true for me. So whatever my impact has been on hip-hop music, I never would have or could have done this s–t without some of the groundbreaking artists that I’m about to mention right now.

“Those were my rock stars man, and I just want to say, like, those are just a few of the names that I hope will be considered in the future for induction. Because without them, a lot of us wouldn’t be here. I know I wouldn’t.”

“So that’s all I had to say, man. I know this induction is supposed to be me talking about myself and s–t man, but f— that. I would not be here without them. I’m a high school dropout man, with a hip-hop education, and these were my teachers. And it’s their night just as much as it is mine. So thank you.”

“OK, let me get serious.

“My rebuttal to those naysayers went something like this: ‘he’s going to be the biggest selling artist on our label.’ Little did I know he was going to be one of the best-selling music artists of all time.”

“From the moment he introduced himself to the world with ‘The Slim Shady LP,’ he skyrocketed to the top of the charts and stayed there for 100 weeks while earning a Grammy for Best Rap Album and Best Rap Solo Performance.”

“Can you believe after promoting violence to little children and killing his daughter’s mother, this guy still had more s— to get off his chest?”

“Well, then ‘The Marshall Mathers LP’ dropped. On that album alone his alter ego, Slim Shady, tied me up in his basement, had sex with his mother and killed his daughter’s mother, again, while proceeding to offend just about every special interest group we have. It clearly struck a collective chord and became one of the fastest selling solo albums in United States history.”

“Em would go on to overdose, relapse and recover not only on his albums, but also in real life. Let me tell you something, this guy goes through a lot of s–t just to get a concept for a song.”

“But here is Em’s genius, with his incredible wit and wild imagination: he was able to hold up a mirror to White America while also expressing the pain of living through poverty in dysfunctional families devoid of hope. Eminem brought hip-hop to middle America and offered kids who looked like him a way to connect to it.”