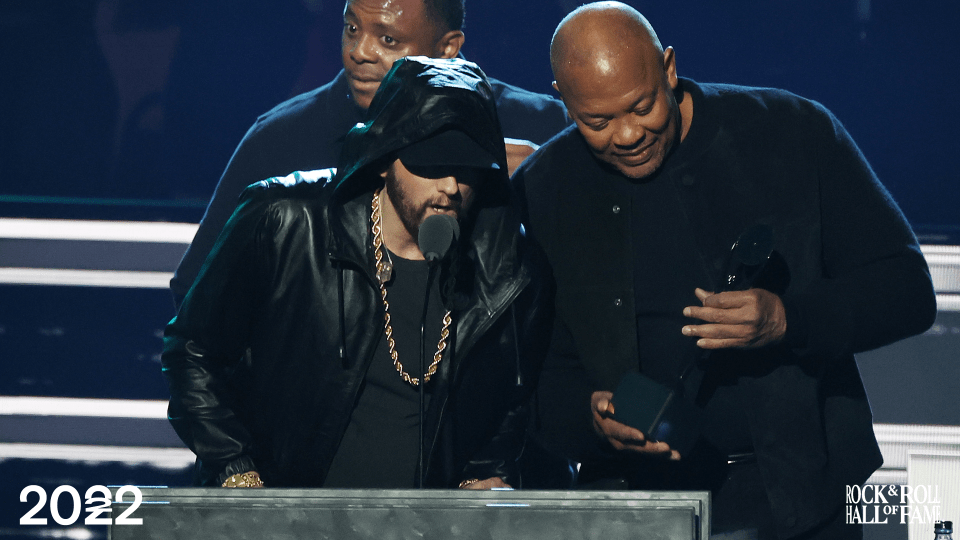 The Detroit News has recently reached out to some of the artists that Eminem shouted out during his acceptance speech at the Rock & Roll Hall Of Fame ceremony. Here is what the legends of hip-hop have to say.

I run into Eminem in 2000 at BET awards. He came off stage and I was standing there and I was like, ‘Eminem, it’s your homeboy, Merciless Ameer.’ And his jaw dropped like he saw a ghost. And he started singing, ‘A Day Without a Rhyme,’ just like in the beginning of my song, and I was like ‘wow.’ That was awesome.”

We heard him say all the names, and we didn’t realize at first it was in alphabetical order, so it took him a long time to get to me. We jumped up out of our seats at the same time, me and my little girl. So that was a very exciting thing.

I gotta congratulate Eminem for making it to that podium, and I completely appreciate him mentioning me. It’s almost like I was there, you know?

That, to me, was such a gracious and amazing thing to do, to have that depth of acknowledgment for all of the artists that he was able to remember in that auspicious moment. Artists that we are well aware of and artists that most of us are probably not aware of, but are all incredibly talented in their own right.”

He’s always been someone who has always been very respectful, not only of where he comes from, but what it took to get him where he is.

At first, I thought I was really special because we were like the fourth name! Then I realized it was in alphabetical order. [He said, laughing].

Everybody was like, ‘oh Milk, get over yourself,’ but I’m like yo, I can hear it! I’m not saying he bit, but to this day whenever I hear (‘Lose Yourself’), I know my song influenced him and the way he did it. I can hear it. And to have him wear the T-shirt and then to give a shoutout — even though everybody around me was like, ‘oh, you’re crazy’ — it just lets me know that he was listening to that stuff. And I know that it influenced him, so that feels good. And one day when I meet him I’m going to ask him about that.

I think that was so classy and so needed. And it’s crazy: Eminem’s a white dude, and he did something that none of the black guys did for hip-hop. To me, that made it even more special. The fact that he went up there and he referenced his teachers, all of the people that influenced him — Jay-Z didn’t do that, LL didn’t do that. And I’m not trying to dis any of them, but I just felt it was real cool that Eminem was the one to do that. That made it even better.

“Hats off to Em. A lot of artists will come out and they don’t pay homage. I always let everybody know, my favorite artists from the 1970s and 1980s, it’s never a Top 5 or a Top 10, it’s like a Top 50, you feel me? So for him to do that, it just shows what type of individual he is. He never forgets.

He’s been doing it ever since he came out, he’s been shouting me out. I love him. I call him my light-skinned twin. And he definitely busted out of hip-hop to let everybody know this not just a culture of Black and Hispanic artists, White emcees and breakdancers and graffiti artists have been in hip-hop since the beginning. And it’s not just, ‘OK, they’re White, that’s why they’re getting all the play and attention.’ No. Everyone knows Em is one of the dopest emcees on the planet, ever. He’s definitely one of the greatest of all time, no doubt at all.

It’s an ego-run industry, and the majority are out there like, ‘I’m the best, it’s only me, it started with me,’ When Em did that, it shows you really how honorable of a guy he is.

Oh man, that bugged me out. There was a bunch of names on there I definitely expected to hear, but Alliance was the underdog on that list, I can tell you. I was elated and humbled.

First of all, the fact that he even acknowledged the emcees that he listened to on the way up, it was incredible to hear. So I just wanted to hear his list. And then Alliance was early. I was like, ‘Woah!’ It was crazy.”

For the rest of the day that Sunday, I was on cloud nine. I was hard to talk to. I was a little difficult to deal with.

I’m teaching music production to students in the Brownsville neighborhood of Brooklyn. I can talk to the kids, and it’s like, you may not know who so-and-so is, but you know who Eminem is, and he mentioned me. It’s gonna be a fun class.

When you a student of the game, that’s how you reflect it. These new artists out here, they don’t know who none of us are, they don’t know who half the people on that list are. And that’s a shame because you’re supposed to at least be aware. We’re not saying be fans or supporters. But if I hear a young jazz cat coming up studying jazz and I say, ‘what’s your opinion of John Coltrane or Miles Davis’ and they respond, ‘oh man, that old stuff? That’s before my time, I don’t listen to that,’ you would look at them like they were crazy. You have to study your craft and at least know the history of it.

It’s just an acknowledgment, and acknowledgment is a lot. Just to be recognized and mentioned means a lot, especially when you put so much into your craft. For an artist like Em, who has blown up as big as he has around the world and who has so many supporters and followers, to show who inspired him to get to that level is a great thing. I’m very honored.