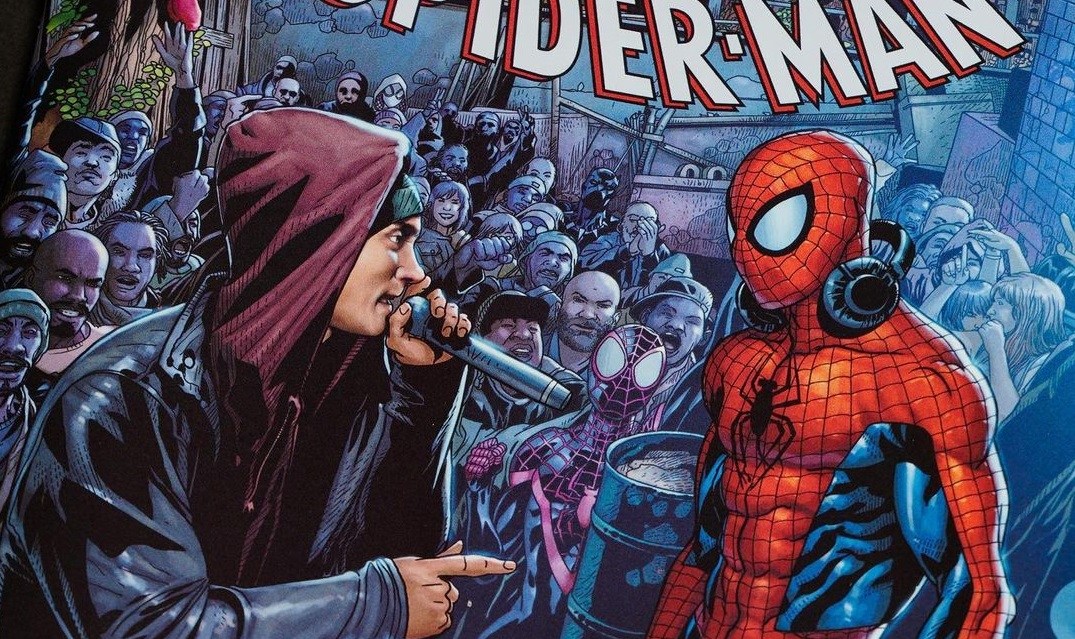 Detroit legend and recent Rock & Roll Hall of Fame inductee Eminem is coming back to Marvel universe for an Amazing Spider-Man variant cover which pits Eminem against Spider-Man (Peter Parker) in an image that pays homage to the climactic rap battle scene of Eminem’s 2002 biopic movie, 8 Mile.

“HONORED to be on the official variant of The Amazing Spider-Man (2022),” Eminem tweeted along with an announcement that the variant will go on sale on November 22, 2022 through Eminem’s official website.

Although the variant is new, the cover appears to be for Amazing Spider-Man #1 (Legacy #895) which was released in April. Judging by the signatures on the art, it was illustrated by Edgar Delgado and Salvador Larroca.

Slim Shady is no stranger to Marvel Comics. Back in 2009, Em co-starred alongside Frank Castle in Eminem/Punisher #1, in which Punisher teams up with Eminem to take on terrorists who interrupt one of his concerts. That comic was also drawn by Salvador Larroca. Additionally, Eminem provided theme songs for Sony’s 2018 Venom film and its 2021 sequel Let There Be Carnage.

Eminem will be the second hip hop legend to appear on a Marvel Comics cover this month. Notorious B.I.G. appeared on a variant cover to Deadpool #1.

As far as 8 Mile, according to the official website of the Recording Industry Association of America (RIAA), 8 Mile soundtracks album has recently earned its 6x platinum certification for selling 6 million units in US, just weeks after the film’s 20th years anniversary.

In honor of the 20-year milestone, Eminem delivered a deluxe version of the 2002 project, The 8 Mile Expanded Edition features all 16 of the songs originally featured on the soundtrack, along with instrumentals to each of the tracks. Em also dropped merchandise which came in three parts and opened Mom’s Spaghetti pop-up in New York City to celebrate the milestone.