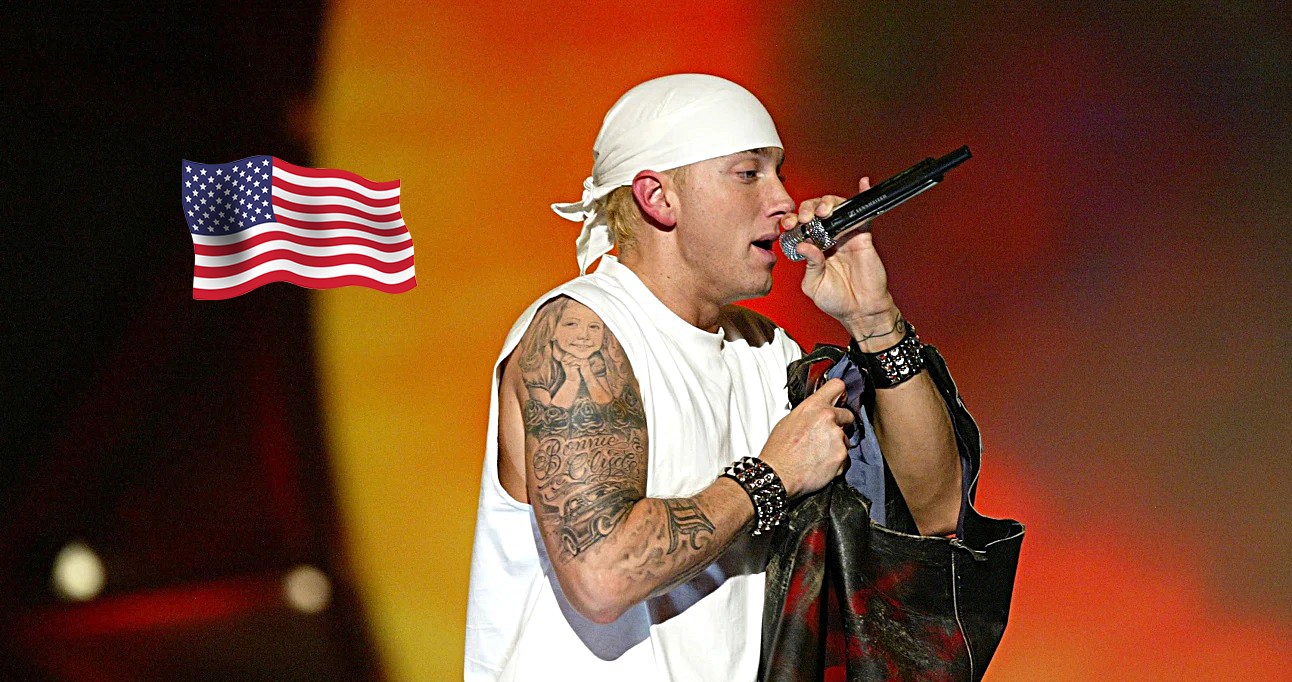 It’s an election day in the United States of America!

U.S. voters are casting early ballots in the midterm elections that will determine control of the House and Senate, as candidates try to muster last-minute support. Democrats are trying to cling to their majorities in Congress for the final two years of President Joe Biden’s first term. Republicans are favored to win control of the House, while the race for Senate control appears tight.

Eminem‘s releases have always been heavy on the politics, especially REVIVAL. The Detroit legend has been taking shots at politicians for years now, So, to honor the election day let’s look back at his finest shots at all the politicians and pundits who ended up on his s–t-list.

“I’m sorry, there must be a mix-up / You want me to fix up lyrics / While the President gets his d–k sucked?”

“Sick, sick dreams of picnic scenes / Two kids, sixteen, with M-16’s and ten clips each / And them s–ts reach through six kids each / And Slim gets blamed in Bill Clint’s speech to fix these streets?!”

“He’s already reconciled with his ex, a chainsaw and an axe / Choke a b–ch to death, strangle her neck / While we have sex, while Bill Clinton plays the sax”

“The ringleader of this circus of worthless pawns / Sent to lead the march right up to the steps of Congress / And piss on the lawns of the White House / To burn the ​​flag​​ and replace it with a Parental Advisory sticker / To spit liquor in the faces of this democracy of hypocrisy / F–k you, Ms. Cheney! F–k you, Tipper Gore! / F–k you with the freest of speech this Divided States of Embarrassment will allow me to have! F–k you!”

“Yeah, the man’s back / With a plan to ambush this Bush administration / Mush the Senate’s face and push this generation / Of kids to stand and fight for the right
To say something you might not like.”

“Stomp, push shove, mush; f–k Bush! / Until they bring our troops home, come on…. Maybe we can reach al-Qaeda through my speech / Let the President answer a higher anarchy / Strap him with an AK-47, let him go / Fight his own war, let him impress Daddy that way / No more blood for oil / We got our own battles to fight on our own soil / No more psychological warfare / To trick us to thinking that we ain’t loyal / If we don’t serve our own country / We’re patronizing a hero; look in his eyes, it’s all lies / The stars and stripes have been swiped, washed out and wiped / And replaced with his own face, mosh now or die / If I get sniped tonight, you’ll know why — ‘cause I told you to fight!

“F–k money! I don’t rap for dead presidents I’d rather see the President dead / It’s never been said, but I set precedents.”

“Run the faucet, I’mma dunk / A bunch of Trump supporters underwater / Snuck up on ’em in Ray-Bans in a gray van with a spray tan / It’s a wrap, like an ACE bandage… Consider me a dangerous man / But you should be afraid of this dang candidate / You say Trump don’t kiss a– like a puppet / ‘Cause he runs his campaign with his own cash for the fundin’ / And that’s what you wanted
A f–kin’ loose cannon who’s blunt with his hand on the button / Who doesn’t have to answer to no one — great idea!”

“No Favors” (with Big Sean)

“And f–k Ann Coulter with a Klan poster / With a lamp post, door handle, shutter / A damn bolt cutter, a sandal, a can opener / A candle, rubber, piano, a flannel, sucker / Some hand soap, butter, a banjo and manhole cover / Hand over the mouth and nose smother… I’m anti, can’t no government handle a commando / Your man don’t want it / Trump’s a b–ch, I’ll make his whole brand go under.”

“We better give Obama props / ‘Cause what we got in office now’s a kamikaze / That’ll prob’ly cause a nuclear holocaust / And while the drama pops / And he waits for shit to quiet down he’ll just gas his plane up and fly around ’til the bombing stops… F–k that! This is for Colin, ball up a fist! And keep that s–t balled like Donald the b–ch!…And any fan of mine who’s a supporter of his I’m drawing in the sand a line, you’re either for or against / And if you can’t decide who you like more and you’re split On who you should stand beside, I’ll do it for you with this: F–k you!”

“Someone get this Aryan a sheet / Time to bury him, so tell him to prepare to get impeached / Everybody on your feet / This is where terrorism and heroism meet, square off in the street / This chump barely even sleeps / All he does is watch Fox News like a parrot and repeats / While he looks like a canary with a beak / Why you think he banned transgenders from the military with a tweet? / He’s tryin’ to divide us / This s–t’s like a cult, but like Johnny he’ll only unite us / ‘Cause nothin’ inside us drives us like this fight does… You stay on Twitter, way to get your hate off, Nazi/ I do not see a way y’all differ/ And all you got are race cards/ Better get the swastika with your name carved in it/ Should be your trademark, ’cause hate’s all you played off/ And you just lick the plate off/ So I guess it pays to feed off of chaos/ So basically, you ate off Hitler.”

“Kiss my butt, my set of principles/ Is gone, but till I get the president to respond/ My pen and pencil is a missile launcher/ And send it to Mitch McConnell/ Just as big of a b–ch as Donald — s–t’s on, bruh!”

“But they’re gonna say you’re tryin’ to take an irrational stance/ If you try to slander the flag but/ Somebody has to be the sacrificial lamb/ So they call it a Kaepernick tantrum/ If you don’t stand for the national anthem.”

“Sandy Hook, Stoneman Douglas / Another lone-wolf gunman / Sometimes I don’t know what this / World has come to, it’s blowin’ up / And this whole country is goin’ nuts / And the NRA is in our way / They’re responsible for this whole production / They hold the strings to control the puppets / And they threaten to take away donor bucks / So they know the government won’t do nothin’ / And no one’s budgin’, gun owners’ clutchin’ / Their loaded weapons / They love their guns more than our children / Shhh, think another one just entered in our buildin’ / And we’ll be ashes blowin’ in the air.”

“Woke up, it was dawn, musta knew somethin’ was wrong / Think I’m becomin’ a monster ’cause of the drugs that I’m on / Donald Duck’s on, there’s a Tonka Truck in the yard / But dog, how the f–k is Ivanka Trump in the trunk of my car?”

“These verses are makin’ him a wee bit nervous / And he’s too scurred to answer me with words / ‘Cause he knows that he will lyrically get murdered / But I know at least he’s heard it / ‘Cause Agent Orange just sent the Secret Service / To meet in person to see if I really think of hurtin’ him / Or ask if I’m linked to terrorists / I said, “Only when it comes to ink and lyricists””

Like many rappers, Eminem had nothing but love for Barack Obama, and never used his music to tear the former POTUS down.