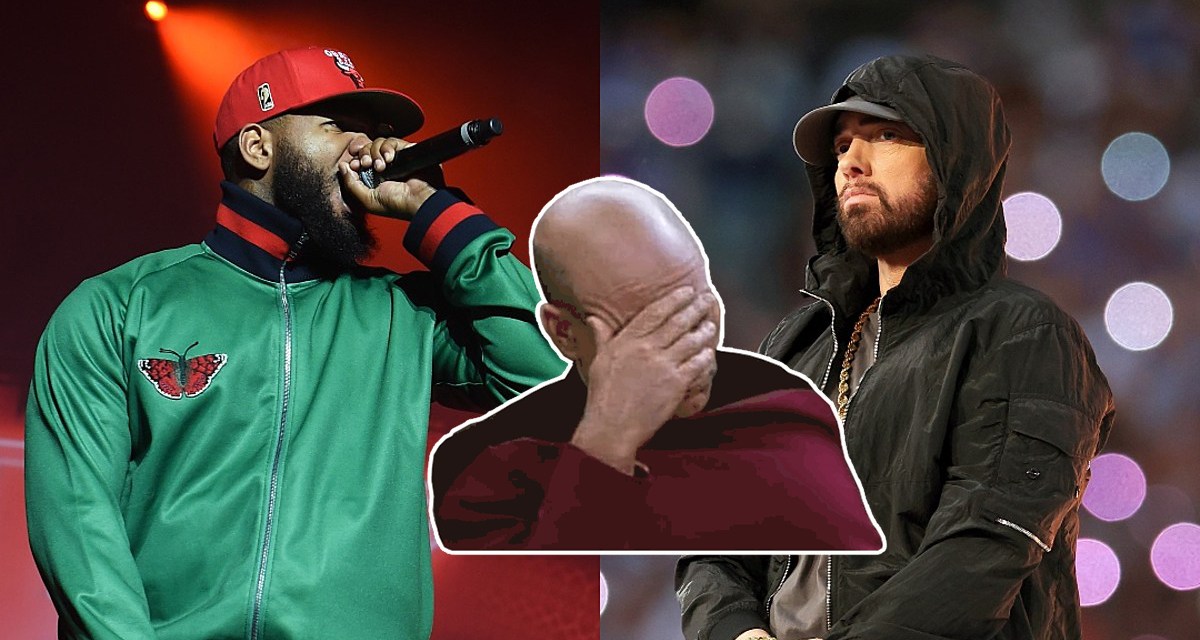 The Game’s new album called Drillmatic: Heart Vs. Mind features star-studded guest appearances but the track titled “The Black Slim Shady” was still most anticipated song in it.

“So ficky-ficky Slim Shady, please, stand up/Shoot the fade with me, I’d love to put these hands up. I could .40 Glock you, unarmed/Drop the world on your head with one arm/Dear Slim, Hailie’s with me and she’s unharmed—for now.” raps West Coast emcee.

The diss-song received mainly bad reviews from the hip-hop heads. You can check some of the best reactions below:

I was expecting something that sounded totally different. https://t.co/XswAkkkqdu

That Game diss song for @Eminem was weak. Not a single bar worth mentioning.

Did anybody hear The Game diss Eminem?? Cuz Not a Damn Soul is talking about it!😂😂😂😂👽🛸🛸

The Game’s Eminem “diss” was a tribute to Em bruh 🤣

Why didn’t Game just make his La Leakers freestyle the Eminem diss track? It was SO MUCH BETTER, I’m literally confused on how bad Black Slim Shady is. I’m nowhere near a Stan & I always thought Game would be a good match for EM, but DAMN. U soooo much better than this Jayceon 😞

Eminem to The Game after he used Eminem's lines on The Black Slim Shady pic.twitter.com/jgQF0j7Iqj

Personally I enjoyed The Games diss track on Eminem.

I can’t wait for a EM response.

I already liked The Game’s albums, he makes great albums.

Watching him troll Eminem fans is fun tho.

Get them streams for the bro!! 🤣

How is it that Eminem is the one that got ‘dissed’ by The Game for ten minutes yet I’m the one sat here feeling disrespected bc I actually wasted my time listening to this? 🤦🏾‍♂️

The Game did an entire press run using Eminem’s name to gain traction then plans to drop a 30-song album. My ni**a they still not going to listen.

Me listening to The Game The Black Slim Shady and waiting for a diss line to Eminem.#MusicWithDMEpic.twitter.com/WSXbPUr8Z2

Me listening to The Black Slim Shady by The Game. #eminem pic.twitter.com/qfTXnrRyzk

Game dropped a 10 min "Eminem diss" that's mid at best, & it sounds more like a love letter from him. Irv Gotti went on Drink Champs to let us know he's still insecure & hating on Ashanti 20 years later cos she won't allow him the access to disrespect her anymore. 50 was right!!

If Eminem responds, it's Game Over.

Don’t come at Eminem unless you’re gonna give it ur beat shot!

Bro that's a Tribute to Em🤣

I don't get why Game called Eminem the "white Royce da 5'9" when Royce himself admitted he was influenced by Em. Royce even used Em's rhyme scheme from Dead Wrong on the original version of Renegade.

Game said no one in the hood listens to Eminem. So why is a hood dude calling himself The Black Slim Shady? 😭 https://t.co/EJ1ANeOPwY

The Game can rap his a** off, he’s one of the best rappers of all time. I thought he would do what THE GAME does on this eminem diss, but instead he just mocked Em’s incredible flows and proved he can’t do it like Em. Fans of both, but this s**t is a let down for hip-hop

Game Tried To Do A Eminem Diss The Same Way 50 Cent Did Him A Little Over A Decade Ago And Fif's Is Still Better 😂 pic.twitter.com/cVQhoDZKRk

The games diss track to Eminem is the wildest s**t I’ve heard in a long time, I haven’t been this confused from a song ever. It’s a diss, but the name is the black slim shady, you say you don’t like his music but literally copy his flow and use his lines in the song, I’m so lost