“Curtain Call 2” symbolized as CC2, is the follow-up to Eminem’s 2005 greatest hits album “Curtain Call: The Hits” which includes three new tracks: “From The D 2 The LBC” with Snoop Dogg and Elvis movie soundtrack “The King And I,” with CeeLo Green and as it turns out “Is This Love (’09),” featuring 50 Cent. The rest of the album is compiled with hits from 2009 to this day.

Couple of days ago, Grammy and Emmy winning Aftermath producer Trevor Lawrence Jr. has revealed that new Eminem track which also involves Dr. Dre, is dropping next week. B y connecting two facts, “This Is Love” is produced by Dr. Dre and features 50 Cent.

The name of the song was unveiled by Target store. A pre-order for the 2LP vinyl has appeared on the store’s site with the official artwork which has a sticker revealing the title of the song ‘Is This Love’ (09′) featuring none other than former Shady/Aftermath hitmaker 50 Cent.

The song is probably from 2009, as the title suggests so we are getting Relapse era Eminem and 50 Cent this or the next Friday! Check the screenshot of the sticker below and visit here for the full tracklist of “Curtain Call 2.” 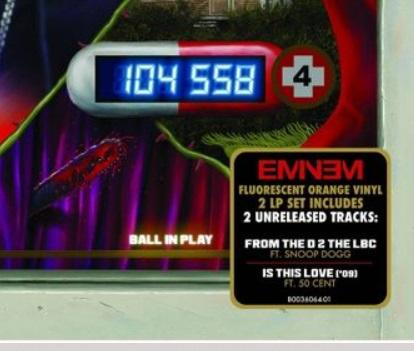