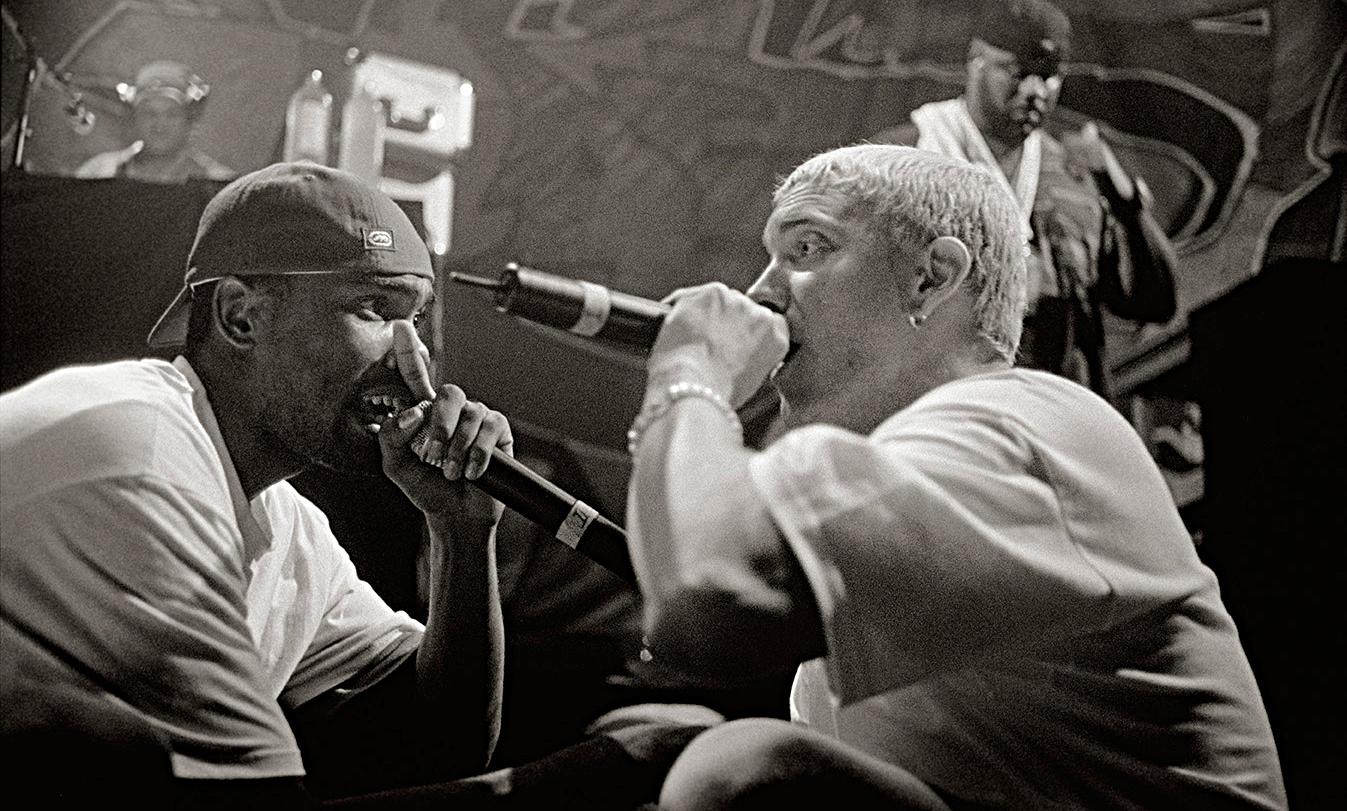 Eminem’s ex bodyguard, Big Naz, who has told many stories about Eminem from the beginning of his career to the top of the charts and who even wrote a book about all these stories, has recently set down with Cap Capone News for an interview and added one more story to his catalog:

“Eminem once had a show in San Francisco, There was a guy in the crowd, OH MY GOD, complete riot, man. It’s a guy in the crowd that was heckling Eminem like ‘F**k you Em, you ain’t s**t, you f**kin wack,’ all that kind of stuff and Em stops the show. He said: ‘Motherf**ker what you say to me?’ He had already been drinking, I would not say he was inebriated but it was one of those things where his adrenaline is high. He is in the highest point of his show and he got somebody heck on him, talking s**t like ‘f**k you motherf**er.’ Em stps the show and he told DJ to stop the f**kin record. He said I’m gonna address thing motherf**ker right here. He said man f**k you, get the f**k out of here man, f**k you. Next thing I know, Em jumps off the stage with a flying right hook, he hit the guy, hit the wrong f**kin dude. So I jumped in, Proof jumped in, the DJ jumped in, the sound man jumped in, Interscope street team jumped in, all the acts that were the opening acts jump in. It’s like 3500 people in this place and we are fighting everybody. It is about maybe 30 of us. It’s not even…What is that? 1 percent?”

“It was like every other night. Em was always jumping in the crowd. Every night. Crowd surf. Sometimes you get down and get a mosh pit. But when he jumped in to fight it shocked me, I had never seen that before so when he jumped in to fight, that changed everything, because he is in the air like a damn superhero that hit the guy but he hit the wrong dude. So now he jumps in,  now he is down there fighting, he’s on the bottom of s**t kicking power. I jump in. I go to get him, I get a guy hit me in the back of my ear, so now everybody’s rushing to the front. I was like ‘F**k Em, this guy just hit me, man,’ so the guy that hit me I hit him, I cold c**k his a*s. I hit him so hard, knocked him out but the crowd had him wavering him back and forth so he didn’t get a chance to fall. So he was wavering back and forth like a dead fish in water. So then Proof jumps in, he was like ‘hey we gotta get Em.’ So we’re pulling these four guys off the Em. The last guy that’s on Em, hitting him, hitting him. So Proof goes in, he is kicking the guy, kicking the guy, Em on the bottom he giving the guy some real shot. Proof was hitting that guy so hard it sounded like somebody banging on bongos. We ended up breaking one of the guys’ ribs. Now while we’re trying to get the last guy off Em, we’re still getting hit, punched, kicked, but now we got to focus on Em, so people are getting free shots because we’re trying to focus on Em. So I take Em, I throw him back on stage, I take Proof, I throw him back on stage and there was a point where me, Young Zee and couple of guys from Outsidaz, we are back to back knocking motherf**kers out.”

“I was getting most shots because I was the last guy to get back to stage. It was total chaos. Riot. And when I got back to stage I said ‘we gotta get out of here right now. So now we are running to tour manager, Gus, but he stops us, he got the doorway blocked, and he said: ‘no, we gotta finish this show, cause if we don’t this motherf**kers gonna kill us. Show must go on and get your a** back there and finish the show.’ So we got back, Proof got the mic and addressed the crowd and then people in the crowd stopped fighting and then Em kicks ‘Just Don’t Give a F**K’ and ‘Still Don’t Give A F**k’ and crowd goes absolutely nuts! Even though we had fights and riots, this was the most memorable show. It was all over the news the next day. I would do it again. It was a good time.”

For the full interview, watch below: