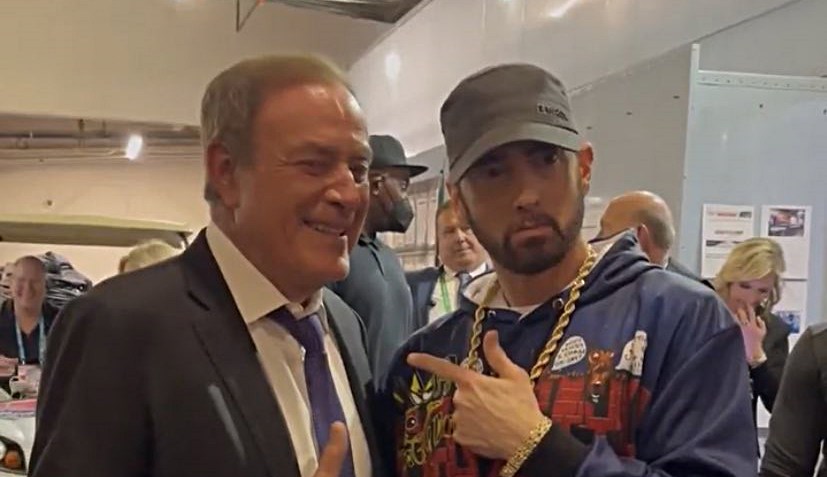 At the Super Bowl 2022 in Inglewood, Eminem and Al Michaels exchanged some beautiful words.

Eminem, alongside Dr. Dre, 50 Cent, Snoop Dogg, Kendrick Lamar and Mary J. Blige performed at halftime — taking a knee despite allegations that the NFL barred him from alluding to Colin Kaepernick’s social justice protests; the NFL later denied the rumors.

“You’re the GOAT [greatest of all-time],” Eminem responded quickly. “I’m telling you, I was telling your wife — since I was a little kid, all the way until now, I watch s**tty games when you’re doing them, just because, right?”

Eminem brought up the “rumor” that Michaels may retire.

“You’re a long way from retiring,” Eminem concurred. You can watch the video below

NFL fans on Twitter were happy to witness two legends showing love to each other. Check some of the reactions below:

A lot of respect to the GOAT Al Michaels from @Eminempic.twitter.com/5cLofcU4XK

Eminem and Al Michaels. What a world. pic.twitter.com/Yqp5fsKHrp

The way Eminem continues to praise Al Michaels after he just performed on the biggest stage there is while Al is trying to give him compliments shows a lot.

It takes no time or effort to recognize someone’s accomplishments or just letting them know you see them. Cool to see https://t.co/WUgryb2LG0

As I wrote in today’s TRAINA THOUGHTS (https://t.co/wrb2pLeGRS), this was the single best thing that happened on Super Bowl Sunday. https://t.co/7GkJtRWtLw

This may be the best video you see all day. Two of the best in their respective crafts putting each other over https://t.co/COwUvsqD1r